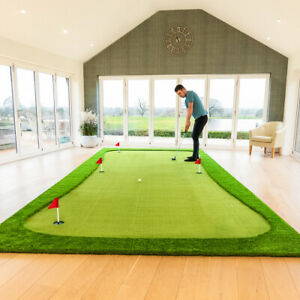 The importance of putting cannot be overemphasized.

Acknowledging that touring professionals play, practice and work on their games pretty much day in and day out, and realizing the complexity of the full swing and the general lack of control over the outcome of longer shots, do you think that your best chance of lowering your score, given the amount of time you have to practice, is with the long game or with the short game?

Since the best players in the world can only manage a two-thirds success rate at hitting the greens the answer is fairly clear. Your best chance of lowering your score lies with the short game, beginning with putting in particular.

There is good news about focusing on your putting and short game: skill development and the reward of lower scores can happen much more quickly than with the full swing and the long game.

And once you combine putting with chipping, and then pitching, and then greenside bunker play and the rest of the short game, the effect on your score should be substantial.

Not sure what putting training aid to buy
for that special present?

A TRocket Golf E-Gift Card is the perfect gift no matter what the reason,

with the convenience of being able to purchase online and have it sent directly to the recipient's inbox.
More Quick Buys
Use left/right arrows to navigate the slideshow or swipe left/right if using a mobile device