We’re Out of Toilet Paper, Hand Sanitizer—and Golf Pushcarts?Once-disparaged device is an item everybody wants after courses ban caddies and motorized carts to fight coronavirus

Robbie Gould, the San Francisco 49ers’ kicker, couldn’t believe his luck when a local store told him it had a line on a product he desperately wanted. The NFL star finally had his very own golf pushcart.

Mr. Gould never had a pushcart because he never needed one. It is essentially a piece of metal with a few wheels attached that makes lugging a bag of clubs around a golf course slightly easier. It’s a device historically associated with grandparents who sign up for 6 a.m. tee times at local municipal courses.

Mr. Gould, 37 years old, belongs to the prestigious Medinah Country Club in Illinois, where he typically uses a caddie or rides in a motorized golf cart. This spring, though, states including Illinois banned or placed restrictions on both caddies and motorized carts, to limit the risk of spreading the coronavirus.

When Mr. Gould first scoured the pushcart market, he was astonished. “Everything’s totally bought up,” he said.

That makes pushcarts one of the unlikeliest products being hoarded during the pandemic. Warehouses are empty of them, retailers are too, and there even is pushcart price gouging. “It’s not unlike grocery stores with hand sanitizers and toilet paper,” said Todd Hansen, a distributor.

Golf has been a popular escape since much of the U.S. went into lockdown. It’s outdoors, and it involves inherent social distancing. Although some golf courses have closed, others have stayed open or recently reopened.

The open ones are taking extra precautions. They have shut clubhouses and raised cups out of the ground so golfers don’t touch them, in addition to reducing or eliminating the use of carts and caddies.

Suddenly, people eager to trade the misery of sheltering in place for the frustration of chasing around a tiny ball realize they need a pushcart.

Mr. Hansen is the national sales manager for ProActive Sports Group, which distributes Clicgear, a line hyped as the “Rolls-Royce of pushcarts.” His firm typically has a strong sense of how much inventory it needs for a season. It takes the estimates, adds a fudge factor and places orders long in advance.

None of its statistical models accounted for a pandemic. As soon as golf courses changed protocols, pushcarts began flying off shelves. Courses tried to order them in bulk. Retailers that sold out wanted more. Individuals went hunting online.

The U.S. has no strategic pushcart reserve. Distributors say it can take weeks or months to get new shipments, a process hardly made easier by coronavirus supply-chain disruptions.

Earlier this year when demand first started rising, Mr. Ramsbottom advised his retail partners to order more while they could. But these are pushcarts. They thought he was nuts.

“Within a week or two, they’d call back begging for carts,” he said.

Google has documented changes in consumer behavior during the pandemic, and this month it found that golf-bag accessories were the No. 1 top-trending retail category. The most popular subtopics within that category were golf pushcarts, golf pull carts and the Clicgear 4.0.

Pretty much the only place to find Clicgear 4.0s these days is the secondary market, where some are priced as if they’d been personally assembled by Tiger Woods. Clicgear 4.0s sell on the company’s website for $259. They’re going on eBay for more than $700.

Pinehurst Resort and Country Club in North Carolina upped its pushcart fleet to 140 from 60 just ahead of the pandemic in January, but for an entirely different reason. The coronavirus-driven boom has coincided with the pushcart becoming more socially acceptable.

A few years ago, it was a device many associated with lower-rent courses. PGA Tour pros sometimes made fun of collegiate golfers for using pushcarts. Pinehurst, which has played host to professional golf’s biggest events, was a “no pushcart facility” until 2018, said Tom Pashley, the resort’s president.

The carts gradually became more common, starting with youth tournaments that allowed them. When the Pinehurst complex permitted pushcarts on one of its courses, Mr. Pashley was amazed at their popularity.

Soon, the club began allowing pushcarts on Pinehurst No. 2, the course where events such as the U.S. Open have been held. Mr. Pashley even began using a pushcart himself.

“There has been this ongoing stigma with pushcarts that is suddenly being lifted,” he said. Now Pinehurst’s fleet is usually all rented out by 11 a.m. 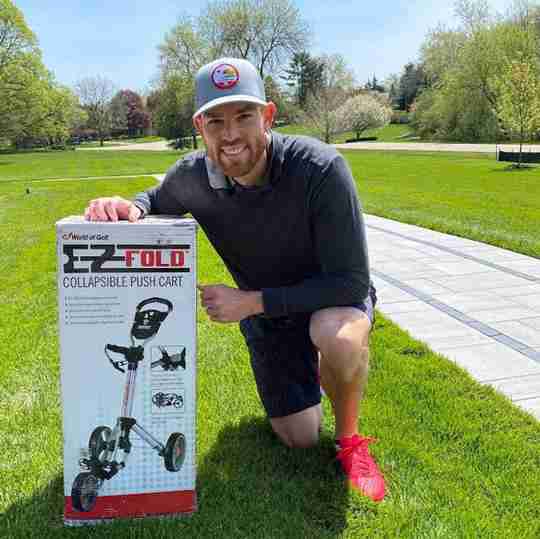 Sorry, There are no Articles